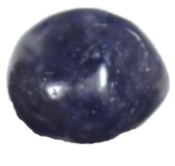 The Vikings used thin slices of Iolite as a light polarizer to locate the exact position of the sun on overcast days. The polarizing nature cancels out haze, mist, and clouds to make things appear clearer. The stone has been called the “Viking’s Compass”.

Shamans would use little pieces of iolite to have visions and communicate with spiritual realms. Iolite is said to increase the holder’s ability to communicate clearly. Shamanic ceremonies vary between cultures but using Iolite was common. Iolite are stones of vision to aid with out of the body journey. Their energy will aid connecting with angels and take you to a higher level spiritually.

These beautiful blue violet crystals may stimulate the imagination and this may aid their use as shamanic stones and they have good healing properties including aiding weight loss.

They are the gemstone variety of the mineral Cordierite and comes in a range of shades. They vibrate within the third eye chakra and produce an electrical charge when in contact with your aura.

This will strengthen the entire auric field and etheric body. They are known to open your thinking, via the imagination and have several other strong metaphysical properties.

Iolite, also known as Cordierite, Dichroite, and Water Sapphire, is found in Brazil, Madagascar, Burma, and India. The name comes from the Greek word meaning “Violet”, after one of the many vibrant colours of Iolite. Other colours of Iolite range from blue, brown, grey to green, yellow.

It is a stone that takes users on an inner path to their deep inner self. Iolite carries beautiful violet-blue energy that activates and clears the third eye allowing vision, communication, and awareness from higher vibrational dimensions.

Iolite strengthens the connection between the third eye and the heart, helping to heal old wounds. Iolite takes you to areas that you’ve once feared awakening the psychic abilities we all possess, showing our past life experiences.

Iolite has been known to have healing effects on the physical body. It will assist you in dealing with addictions (mental and physical). It is highly recommended for people who struggle with alcoholism. With that in mind it also supports detoxification and regeneration of the liver whilst killing off bad bacteria. Iolite also eases fevers, headaches and migraines.

Iolite works well with Peridot and Citrine. Hematite, Jet if you want financial success. Garnet combined with Iolite help users ground themselves. This may be needed due to the strength of the Iolite’s vibrations. Some users who are new to working with Iolite will occasionally have issues of feeling “out of body” which is where Garnet helps you to be grounded.

How to Use Iolite for the Best Results?

Wearing Jewellery made from Iolite close to your vibrational fields helps you benefit from its healing energies! Placing Iolite inside your home or your office supports your activities, projects and endeavours.

Using Iolite for meditation allows you to receive guidance and insight and achieve total healing.

Don’t clean Iolite using boiling, steam cleaning or ultrasonic methods as it is quite susceptible to heat damage or temperature changes. Just Cleanse it at least once a week under warm running water and then charge it with rock crystals under natural light for at least an hour

Disclaimer: Crystal healing is a complementary therapy and should not replace the advice of medical professionals. The information found on this site is not medical advice and the effectiveness of the healing properties of this product cannot be guaranteed.