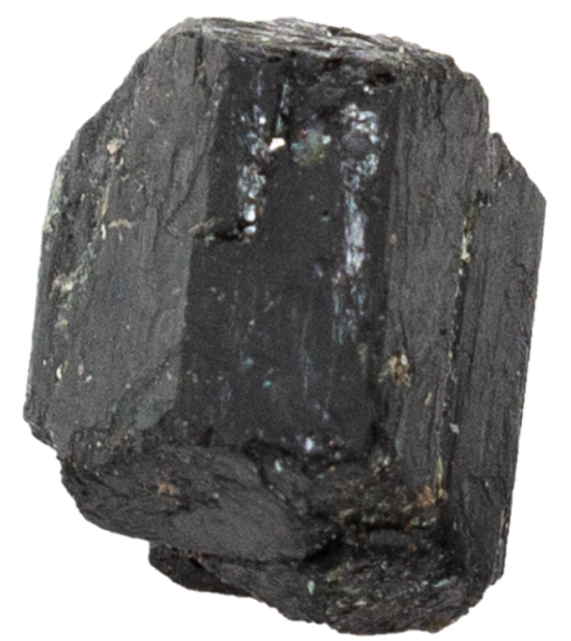 Black Tourmaline was originally called the unromantic name of Schorl after the German village where they mined tin and the stone. Not only did the stone change its name to Tourmaline (from the Sinhalese word tormalli) but the town also changed its name to Zschorlau.

Tourmaline, particularly black tourmaline is very abundant and found throughout the world and is created through volcanic magma flows which then crystallise to from the gemstone. An unusual feature of the stone is that it has magnetic properties and can hold an electrical charge due to large quantities of iron and manganese. Tourmalines of all colours can be electrically charged by rubbing your fingers on each end which will attract air particles.

It was used by ancient cultures as a stone of protection and believed to give them a protective shield protecting them from physic attacks. It can help defend one against the radiation given off by various electronic devices.
Black tourmaline is one of the most powerful grounding stones that you can use to activate the Root Chakra.
Tourmaline comes in many different colours and the Ancient Egyptians believed this was because the stone the travelled across rainbows, picking up its colours from each band.

Ancient gem dealers struggled with determining the difference between gemstones and pink and red tourmaline was often mistaken as rubies. It is rumoured that some gemstones in ancient royal crowns are not rubies but tourmaline.
Tourmaline is the traditional 8th wedding anniversary gemstone. Black tourmaline brings safety and is the zodiac stone for Capricorn. Those born under Capricorn need to feel firmly grounded to pursue their ambitions making a companion.

Black Tourmaline is one of the most popular stones used in spiritual practices and commonly used for protection. The stone acts as a negativity deterrent by cleansing and protecting your auric field. The purification that Black Tourmaline provides is perfect for anyone struggling with anxiety, anger, and unwanted thoughts. This stone takes the negative energy surrounding you and purifies it.
Create a wand with Black Tourmaline, Selenite and Rose Quartz this will deter negative co-workers or clients.

Black Tourmaline blocks electromagnetic waves like the ones caused by mobile phones, laptops, televisions etc. Having Black Tourmaline on or around you while using electronics for an extended can reduce their residual effects.