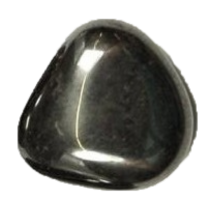 Hematite also known as haematite, is a common iron oxide. Hematite naturally occurs in black to steel or silver-grey, brown to reddish-brown, or red colours. Hematite is mined as an important ore of iron. It is electrically conductive. Hematite rates a 6.5 on the hardness scale. The name hematite is derived from the Greek word haima, Greek word for blood due to the red coloration found in some varieties of hematite. Hematite is also called ‘bloodstone’ because of its colour or ‘iron rose’ because some specimens can have mimic the petals of a flower.

Hematite is often used as a pigment and one of the most frequently used ones is Ochre, a clay coloured by up 70% of hematite. Red ochre contains unhydrated hematite, yellow ochre contains hydrated. Today, it is still used as pigment, as well as a metal polishing powder called ‘jeweller’s rouge.’

Hematite crystals that are shiny have traditionally been used in mirrors and are s called specular hematite.
Powdered hematite was used by prehistoric man for cave paintings. The ancient Egyptians placed hematite objects inside their tombs used it as a paint for tomb decorations. The red powder was essential for Native Americans as a war paint.

Hematite has been used in magic for over 3000 years. In ancient Babylon, it was carried by warriors for strength to overcome enemies and was believed to help cause stone walls to fall.

It was believed that large deposits of hematite formed on battlegrounds where soldiers were injured and lost blood from their battles.

Hematite has been associated with blood for thousands of years. In the past, it was worn as protection against bleeding. It was believed to have the power to stop bleeding as well as prevent excessive bleeding in childbirth. Today, hematite is still worn to keep the blood healthy and to help cure blood-related diseases.
Hematite also has other attributes to speak of. It is a powerful stone which is believed to aid in overall healing, courage, legal matters, alertness, vivacity, wealth, strength, power, business and agriculture. It calms fears, eliminates anger and fosters peace.

Fine-grained hematite helps gives Mars. NASA discovered Hematite on Mars by the infrared spectrometer on the NASA Mars Global Surveyor and the 2001 Mars Odyssey spacecraft. Grey Hematite in particular needs water for it to occur
Hematite is believed to be a healing and grounding stone, strengthening the body and lessening life’s stresses.

It is thought to reduce stress and enhance one’s personal magnetism. It is also thought to increase optimism and courage and helpful in transforming negativity.

Hematite is one of the most powerful grounding stones in the mineral collection, intended to root your body and mind back to Earth. Hematite focuses your thoughts and actions into what matters most to and puts you on the right path.
Much, like a magnet, it is a stone of attraction Hematite is constantly pulling down excess energy from your surroundings for you to use. Once you become grounded, Hematite shows you that your desires are achievable. When connecting with Hematite we can strengthen our root chakra to keep our attention on the task at hand. To get you in the right frame of mind, work with your Hematite each day to centre your energies.

If you find yourself matched with a high vibrational stone (Phenacite, Moldavite, Grandidierite etc.) that you feel is too powerful pair it Hematite to bring in strong grounding energies.