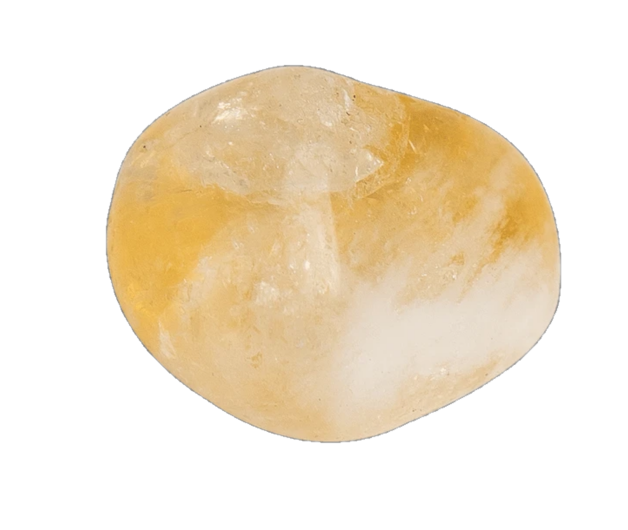 Citrine is the name given to the yellowish/orange variety of Quartz that has inclusions of Iron Our word citrine comes from the Greek / Latin word citrina meaning “yellow.” Citrine is the golden variety of quartz and comes in shades of yellow, orange, and brown. In ancient times, people believed that citrine gemstones could calm tempers, soothe anger and manifest desires, especially prosperity and referred to citrine as the “merchant’s stone” or the “money stone” because they believed it could bring prosperity to individuals.

The Egyptians would associate this stone with the warrior goddess Sekhmet. She was represented like a woman with a lion head. To leverage these powers, Egyptians used citrine as talismans

Citrine has been used ornamentally for thousands of years. In Ancient Greece, the stone was used as a decorative gem during the Hellenistic Age between 300 and 150 B.C. when they carved iconic images into them. Citrine was dedicated to the harvest goddess, Demeter.

In ancient Rome, Roman priests fashioned citrine into rings because of the belief that it could protect against evil thoughts.

In the 17th century, Scottish weapon makers used citrine to adorn dagger handles, sometimes even using a single crystal as the handle itself. Citrine is said to radiate positive energy and is known as the “success stone.” Legends say that the gemstone made men more handsome and intelligent. It was also believed that it could help women bear more children and increase happiness.

Largely due to Queen Victoria’s affinity for the gem there are many beautiful examples of citrine during the 1800s. Queen Victoria had a special fondness for the stone and used it to decorate her and Prince Albert’s summer residence. Many were inspired to imitate her style and citrine became a popular stone for traditional Scottish kilt pins

Citrine was particularly popular during the Art Deco era between World War I and World War II when movie stars wore oversized and elaborate citrine jewellery. It was worn by many Hollywood stars such as Greta Garbo or Joan Crawford.

If you are looking for a change or a spark of imagination, grasping this stone each day and letting the universe hear your goals will amplify its energies. It is about changing from about thinking or wanting to focusing and doing. Citrine concentrates our root chakra bringing our desires to life.

Citrine has a deep connection with Mother Earth and our root chakra. When you meditate with Citrine, try doing so outside especially during dawn or dusk (Earth’s most potent times) when all her energies are easily accessible.