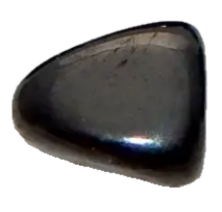 Jet (Lignite) is not a crystal but more a fossil having been created through decaying wood under extreme pressure. Jet has been used in history as far back as 10,000 BCE. with a carving of a larva discovered near the Venuses of Petersfel in Germany. The finest specimens are found on England’s northeast coast especially around Whitby.

Jet has been used in Britain since the Neolithic and through to the Bronze Age where it was used for necklace beads. During the Iron Age jet went out of fashion until the early 3rd century

Whitby jet was a popular material for jewellery in Roman Britain from the 3rd century. The Romans organised its collection from the beach at Whitby and transferred to Eboracum (York) where it was turned into rings, hair pins, beads, bracelets, bangles, necklaces, and pendants. The Romans believed it to be a magical material because of its protective qualities and ability to deflect the gaze of the evil eye. Pliny the Elder suggests that “the kindling of jet drives off snakes and relieves suffocation of the uterus. Its fumes detect attempts to simulate a disabling illness or a state of virginity

In Whitby, the Victorian tradition continued up until World War II. Jet Jewellery (both vintage and new) fell out of fashion until the 80s. Then Jet beads and antique jet jewellery started to rise in value.

Jet can be found in both soft and hard versions. Soft Jet occurs when carbon is compressed with freshwater, while hard Jet is with saltwater.

Jet has been used by people mourning for centuries. It works very well in drawing out the negative energies that surround your aura. Jet acts as a purifier, attempting to draw and dispel any unwanted energy while at the same time ushering in positivity.

For centuries it was said to bring luck to anyone who would carry it.

Jet is full of Mother Earth’s energy and ideal for someone in need of assistance with grounding because it roots you down to earth while assisting in balancing and protecting.

Ajoite pairs very well with Jet and is a strengthened of the emotional spirit.