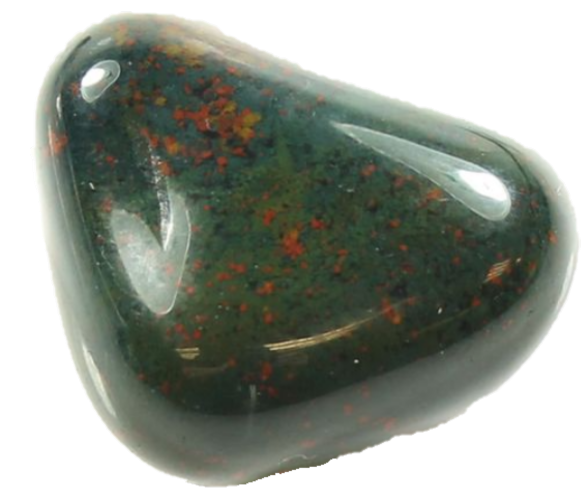 The mineral more commonly known as bloodstone is an aggregate officially called heliotrope after the Greek ἥhḗlios “Sun” & trépein “to turn” but, is a mixture of quartz that occurs mostly as jasper (opaque) or sometimes as chalcedony (translucent). The “classic” bloodstone is opaque green jasper with red inclusions of hematite. The red inclusions may resemble spots of blood, hence the name bloodstone.

The ancient Greeks and Romans wore the stone to bring fame and fortune and to protect against the bite of venomous creatures. Their athletes used it as a lucky charm to bring victory in the games. Ancient Roman soldiers believed the stone had the ability to slow bleeding and wore it for this reason.

Similarly, Asian Indian people have the same belief that it could staunch bleeding. They would cool the stone in cold water* and place it on the wounds. Naturally, cold and pressure stop bleeding and the stone contains iron oxide which is an effective astringent. In Indian culture, Bloodstone is also considered an aphrodisiac

*When this stone is placed into water it will add a reddish hue that will be intensified when the sun’s rays hit it.

The Leyden Papyrus, written in Greek in the 3rd CE. states that Bloodstone will give the wearer whatever he may ask for and “whatever thou wearer says, he will be believed. Whoever bears this stone, which is a gem, and pronounces the name engraved upon it, will find all doors open, while bonds and stone walls will rent asunder.”

Heliotrope was believed to have very bizarre magical properties. The Roman historian Pliny the Elder wrote that the magicians used it as a stone of invisibility. Whilst Damigeron wrote about its property to make rain, solar eclipses and its special virtue in divination and preserving health and youth.

A Christian story states that during the crucifixion, Jesus was stabbed in the side by a Roman soldier and that his blood falling on the stone gives it the red flecks.

Ground, powdered, and mixed with honey, Bloodstone was used to cure tumours, draw out snake venom, and staunch haemorrhages. It was said to clear putrefaction of abscesses in a day, and simply looking at the Bloodstone was believed to prevent eye diseases.

Wear or carry Bloodstone to increase mental clarity and to aid in decision-making. It provides a mental boost when motivation is lacking and can revitalize the mind and body if you are exhausted.

Bloodstone stimulates dreaming and heightens intuition. It can increase creativity and cultivate a project from the idea stage through to delivery.

Bloodstone is a nurturing mother goddess stone, helpful in easing misunderstandings or difficulties with mothers or mothering issues. It also assists human and animal mothers in the bonding process after a traumatic birth or one where mother and baby were separated for a time.

Working with Bloodstone invigorates the system, boosting energy levels and increasing endurance in physical activity. Great for everyone from athletes to less able people for its steady vibration of purification and wellbeing.

Bloodstone activates our inner strength, willpower and courage that may have been masked by fear. This stone purifies our negative energies and converts thoughts and feelings into positive ones. Bloodstone helps us to aspire to who we genuinely want to be and that only we should judge our thoughts and actions.

Bloodstone is a thought provoking stone to aid the process of manifesting our subconscious ideas into reality. Trusting your intuition and allowing it to be channelled through experiences and moments will lead you on new paths.