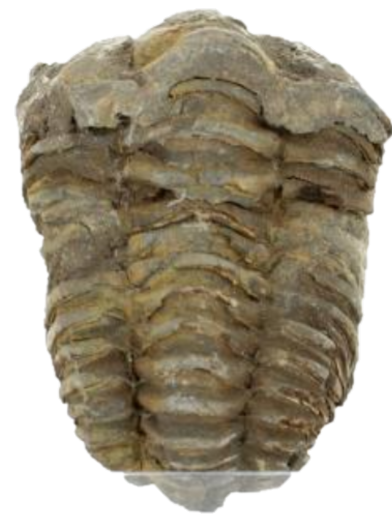 Trilobites were sea creatures and lived in very shallow water to very deep water, although some existed on land. Most fossilised remains of trilobites are always found in rocks containing fossils of other salt-water animals such as brachiopods, crinoids, and corals. Trilobite means, “Three lobes.” referring to their body sections. They are most closely related to modern horseshoe crab and moult their exoskeleton much like crabs.

Trilobites, first appeared at the beginning of the Cambrian Period, about 542 million years ago and became quite abundant with over 20,000 variations before becoming extinct in the Permian Period about 251 million years ago.

Trilobites moved over the seabed as predators, scavengers, or filter feeders. Some swam and fed on plankton. The smallest species is Acanthopleurella stipulae with a maximum of 1.5 millimetres (0.059 in). The world’s largest-known trilobite specimen (Isotelus rex) is 72 cm. A trilobite specimen found in Arouca, Portugal is said to measure 86.5 cm (34.1 in)

All trilobites are thought to have originated from present-day Siberia but are found on all modern continents, and occupied every ancient ocean from which Palaeozoic fossils have been collected

A famous location for trilobite fossils in the United Kingdom is Dudley. This trilobite is featured on the town’s coat of arms and was named the Dudley Bug or Dudley Locust by quarrymen who once worked the now abandoned limestone quarries.

In 1698 the Welsh Historian and Reverend, Edward Lhwyd published in the oldest scientific journal in English (The Philosophical Transactions of the Royal Society) a letter “Concerning Several Regularly Figured Stones Lately Found by Him”. Accompanied by a page of fossils etchings. One etching featured a trilobite he found near Llandeilo which he described as “the skeleton of some flat Fish”

The Swedish (fjarilsstein) and the Chinese (Hu-die-shih) both mean butterfly stone and in Chinese Bien-fu-shih or bat stone.

In 1886, in the Grotte du Trilobite (Caves of Arcy-sur-Cure, Yonne, France), archaeologists discovered a trilobite fossil that had been drilled as if to be worn as a pendant 15,000 years ago. Trilobites are not found locally, so it must have been traded from elsewhere and highly prized.

Until the early 1900s the Ute Native Americans of Utah wore trilobites as amulets, which they called pachavee (little water bug). The Ute believed trilobite necklaces protect against bullets and diseases such as diphtheria. US President Thomas Jefferson possessed a trilobite as part of his famed “cabinet of curiosities” natural history collection.