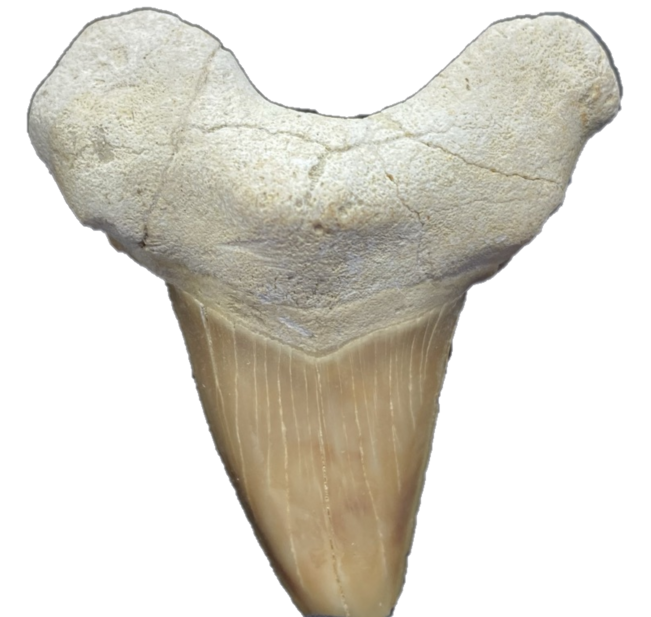 When people consider shark fossils, it is the teeth that grab the attention. However, many other parts of their body can become fossilised, the centres of the vertebra, jaw cartilage, fins and the rostral node in a shark’s snout. The shark’s skin is made of tiny denticles which whilst part of the skin is composed of similar material to its teeth. Shark coprolites (faeces) are sometimes found.

Teeth are the most popular and common shark fossil collected. The teeth preserve quite week due to their high level of dentin and surrounded by a very hard enamel shell. Dentin is harder and denser than bone and does not decompose easily.

Shark shed their teeth every few weeks going through anywhere between 25,000 to 50,000 in their lifetime. Just like us, sharks have teeth of varied sizes and shapes for specific purposes: crushing, grasping and cutting.

Crushing teeth are short and round for crushing mollusc shells and crustaceans.

Grasping teeth are long and pointy to grasp fish.

Cutting teeth are usually triangular and have serrations, like a steak knife, and are designed for cutting through bone and taking chunks out of large prey.

Shark skeletons are composed of cartilage and rarely survives fossilisation and complete fossilised skeletons are rare. The vertebral centra (disc shaped centres of vertebra) are the densest part of the shark skeleton and sometimes fossilise. Centra from a baby shark may only be 3mm while C. megalodon centra may be around 125mm or 150 mmm (5 or 6 inches) in size.

Shark coprolite (see our blog post Coprolite) comes in different shapes and sizes but typically has a spiral pattern on it. Like most Coprolite it can indicate what type of fish the shark has eaten by the undigested bones inside it.

Some species of sharks had a spine on the leading edge of fins. Whilst more prevalent in early Palaeozoic shark species they are still found in the current day dogfish shark.

They resemble miniature teeth, having a “root” like section, with an enamel tip sticking out. This part, made of bone, anchors the scale to the skin. Denticles are usually very small (a few millimetres) and are often missed.

Fossilised shark cartilage is often found as broken pieces and has a unique prismatic pattern making it unmistakable when found.

When fossilised shark teeth were first discovered embedded in rocks, the Roman naturalist and author Pliny the Elder (CE 23–79) speculated that the curious triangular objects were meteorites that rained from the sky during lunar eclipses.

In the Middle Ages people believed that they were the tongues of serpents that had been turned to stone by Saint Paul. According to this fable, Saint Paul was shipwrecked on Malta and bitten by an adder. He cast a curse on all the snakes on the island, turning their forked tongues to stone. Hence, they came to be called glossopetrae, or ‘tongue stones’.

Tongue stones were highly valued objects and believed to have medicinal properties. Malta had the finest specimens and they exported large quantities. Tongue stones were thought to act as an antidote to snakebites if touched. And if dipped in a poisoned drink would reduce its effect. They were mounted in silver and worn as pendants, carried, or sewn into pockets. They were also powdered and sold as remedies for plagues, fevers, poxes, labour pains, epilepsy, and even bad breath.