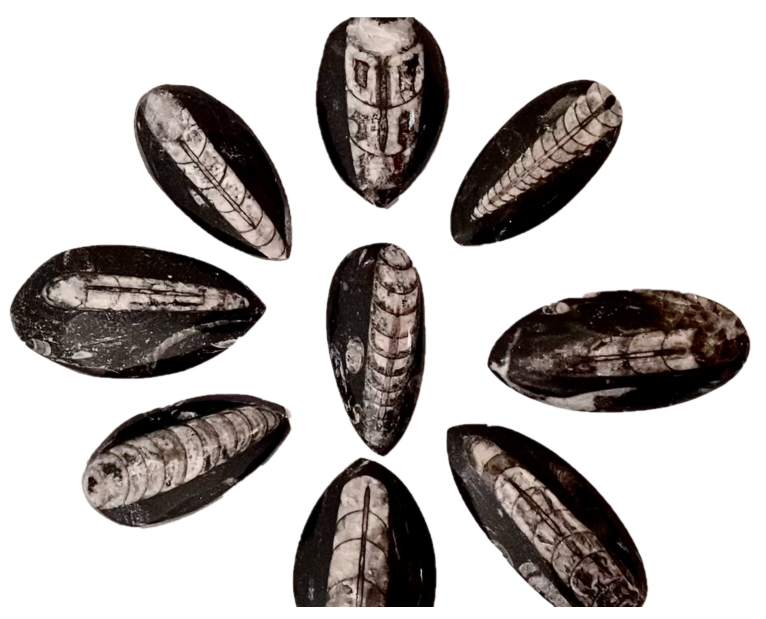 Orthoceras are a mollusc that lived in the sea more than 400 million years ago during the Devonian period of the Palaeozoic era. They are related to our modern day squid, octopus, cuttlefish etc. All of these are predators and we can assume that Orthoceras was as well.

The name Orthoceras translates as “straight horn” due to their long and conical shell. Orthoceras came in many different sized during the Palaeozoic era. Some species were small, just a few centimetres. Endoceras specimens have been measured at 3 meters. Cameroceras was the largest of the Orthoceras which could have reached 11 meters in length!

Like many of the molluscs, the long shell is divided into segments and the Orthoceras’s body lived in the last open-ended segment at the large end of the conical shell. As the body grew and the housing segment became too small, a new segment developed and the Orthoceras moved into this segment and build a dividing wall, called the septa, grew to separate the old chamber. A tube (siphuncle) ran through each chamber along the length of the shell. The siphuncle is a tube that runs the entire length of the shell, through each of the chambers. This tube had two functions. Once filled with water, the nautiloid could force the water out, propelling itself backward with jet propulsion. By releasing the water and leaving air space, the tube could serve as a buoyancy device allowing the animal to rise and lower itself to different depths.

Orthoceras fossils are found all over the world, the largest source today is from Erfoud in Morocco

An ancient belief suggests that wearing Orthoceras daily can increase your lifespan.

Orthoceras are believed to hold ancient knowledge and energy and by meditating with the fossil’s energy, you may feel a connection to ancient Earth and all its knowledge.

Orthoceras will activate our root chakra by grounding us down to earth with ancient energy. Getting connected to this ancient creature may be a bit challenging, but the reward is well worth it.