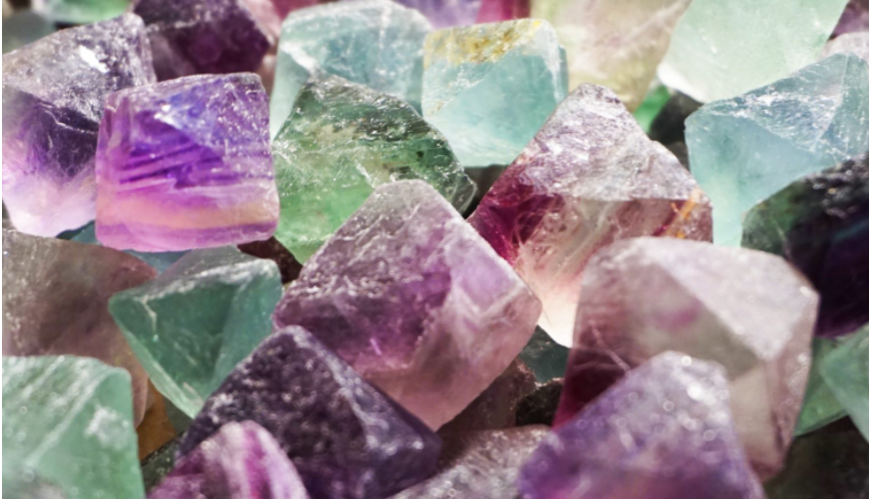 Fluorite is a calcium crystal with multiple colours have been known to commonly occur on the same specimen and are known to be found near Quartz and Calcite.

Specimens of fluorite produce a blue glow when illuminated with light. Fluorite typically glows a blue-violet colour under short-wave ultraviolet and long-wave ultraviolet light. Some specimens are known to glow a cream or white color. Many specimens do not fluoresce. Fluorescence in fluorite is thought to be caused when trace amounts of yttrium, europium, samarium, or other elements substitute for calcium in the fluorite mineral structure.

Fluorspar, the name used for fluorite when it is sold as a bulk material or in processed form. It is sold in three different grades (acid, ceramic, and metallurgical).

Whilst having a wide range of different colours some has its own very unusual property:

Antozonite: Fluorite with the element fluorine incorporated in it. Known for its unpleasant smell when it is crushed because fluorine reacts to oxygen and water vapour to produce ozone.
Blue John: Only found in one small part of the UK. The mineral has bands of blue, purple, and yellow colours.

Chlorophane: This rare mineral has the property of thermoluminescence, meaning that it emits visible light when heated even from the heat of someone’s hand while they hold it.

The Chinese used the scarlet fluorite as a protection against bad spirits. Green fluorite would be a substitute for jade in stone sculptures.

The Egyptians would use fluorite to carve pearls, scarabs and other religious artefacts.

The Romans believed drinking alcohol in a carved glass of fluorite would avoid drunkenness. Objects made of fluorine were found in the ruins of Pompeii.

Drinking cups made from Murrine (almost certainly fluorite and mined in Persia.). The stone gave a strange, pleasing taste to wine when drunk from them. This taste was from residual resin (myrrh) that was applied to the stones, during carving to prevent shattering.

The Roman Historian Pliny the Elder wrote that ‘vasa murrina’ were first introduced to Rome by Pompey the Great in 62-1 BCE, after his victories in the East. The vessels were so desired that Pliny tells us that the highest price paid for a fluorspar cup was 1,000,000 sesterces, by the Emperor Nero. We also hear of a former Roman consul who paid 70,000 sesterces for one. He was said to be so fond of his cup that he gnawed its rim. The British museum have two very famous Roman drinking cups (the Barber cup and the Crawford cup) both made from fluorite.

The Romans excavated the famous “Blue John”, which is a peculiar blue yellow fluorite. The Latin word ‘murra’ is regularly identified with the mineral fluorspar.

In the Middle-Ages, Fluorite was called “ore flower.”

Murrine (murrina) and Murrino glass has very ancient origins, the first works date back to 3,000-2,000 BCE by Syrian, Egyptian and Roman glassmakers. The term “Murrino” was used to identify all the mosaic glass vases and bowls that the Romans made using cane sections coloured patterns or images made in a glass cane. These are revealed when the cane is cut into thin cross designs such as faces, flowers and animals. These vases were made of murrha, a material characterised by the presence of Fluorite which gives the objects a particular smell, due to the resins used as a binder during the process or more likely because they were used to contain perfumes.

During the Middle Ages, the murrino glass technique was lost, but was restored at the end of the 19th century

Fluorite is known for its healing properties of cleansing and stabilising the aura Neutralising negative energies and stress in the body.

Fluorite is a stone known for clarity and mental enhancement concentration, self-confidence, and decision-making. Fluorite will allow the mind to flow freely to balance thoughts and ideas.

It is highly recommended for people who have trouble navigating life by assisting in making the decisions you genuinely want. It is an important stone for Libras and can better their confidence, especially when it comes to important decisions that affect the future.

There are many colours of Fluorite, each with its own unique effect on users.
Pink Opens up the heart and assists in self-love and healing.
Black The ultimate cleanser and purifier of negativity. Its energies serve as a shield around your emotional body.
Purple For spiritual balance as it attunes the mind with higher vibrations and enables the ability to ascend our spirit and consciousness.
Blue Calms emotions and helps communicate ideas. Ideal for teachers, speakers, artists etc.
Colourless is an intuitive stone and activate the third eye leading to enhanced psychic abilities.
Green Fluorite connects our heart and mind together bringing a balance between emotion and thought. It can bring hormones into balance as well as harmonising the chakras.
Yellow shares a sacred connection between the solar plexus and third eye chakra. This bond creates a pathway towards self-expression to enhance creativity, as well as for calming the mind.

Using Quartz with different colours will enhance the effects:

Jet or Obsidian (Black) will assist in the cleansing of one’s energy field.
Emerald, Rose Quartz, and Pink Tourmaline When using Fluorite to activate the third eye in conjunction with the heart; will assist.
Pyrite Helps activate our lower-tiered chakra system and bring manifestation energies to the forefront. With a clear and conscious mind, it will help our dreams become a reality.