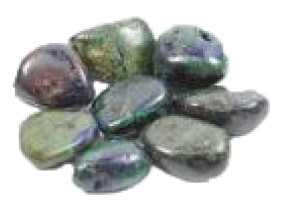 Azurite is a soft, deep-blue copper mineral produced by weathering of copper ore deposits. During the early 19th century, it was also known as chessylite, after the Chessy-les-Mines. It has been used since ancient times and was mentioned in Pliny the Elder’s Natural History under the Greek name kuanos (English cyan) and the Latin name caeruleum. The colour has always been associated deep and clear blue sea and skydesert and winter skies. The modern English name of the mineral reflects this association, since both azurite and azure are derived via Arabic from the Persian lazhward (لاژورد), an area known for its deposits of another deep-blue stone, lapis lazuli (“stone of azure”).

Azurite is a rare variety of gemstone-quality copper ore. Azurite is one of two basic copper carbonate minerals (malachite is the other). Azurite is rarer than malachite and is considered more valuable. Azurite gets its name from the Persian word ‘lazhward’, which refers to its distinctive, vivid blue colour. Azurite is a fairly soft stone and its use in jewellery is actually quite rare. In fact, azurite is more sought-after by gem and mineral collectors, rather than jewellery designers.

One of the first major sources of azurite was discovered in Chessy, a small commune located in the eastern suburbs of France, close to Lyon. Owing to its Chessy origin, azurite earned its locality-based trade name, ‘chessylite’. In addition to gem use, azurite is also an industrial gem, much like garnet. In fact, since the Middle Ages, azurite has been used to produce pigments and textile colour dye. Azurite was sacred to the Egyptians who believed it was an aid to spiritual communication.

Many believe that this stone helps to reduce anger and to increase psychic awareness. It is also thought to reduce abnormal cell growth, promote wisdom, and is used as an aid to relieve the pain of rheumatism.

Azurite is a stone that activates, unlocks, and links our third eye and crown chakras. It is one of the premier stones to access our psychic abilities.

Azurite can help enhance dreams but also decode their imagery and meaning. It can raise mental awareness, intellect and wisdom. This copper carbonate will help in the cleansing and purging of negativity within the mind. Azurite brings with it great clarity that can help with disposing of negative thoughts, bad habits, and even addictions.

Azurite works well with other high-frequency stones such as Phenacite, Shattuckite, and Danburite. When using these stones with Azurite, our third eye will both strengthen and mental awareness expands.

A variation of this stone was discovered at the base of the second tallest mountain in the world, K2 after which it is named. The stone is comprised of white granite with drops of Malachite and Azurite that occurred after the formation of the primary stone.