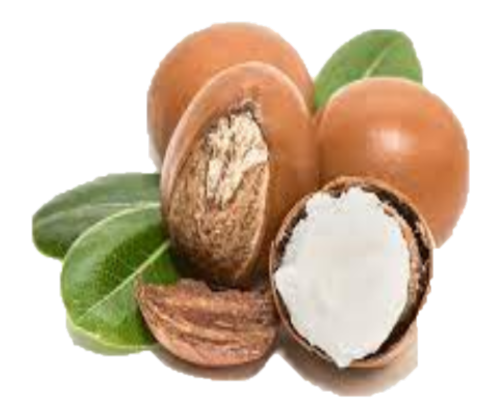 Whilst there is a lot of modern marketing spiel attributed to Shea butter and its use in soaps and shampoo. It is genuinely called “women’s gold” not just for the benefits to the skin but for the independence and status it gives to many native processors. This empowerment process has imparted “a certain sense of self-respect among the workers. It has also helped the women producers earn the respect of their family and the right to speak out in the community.”

The tiny, almond-like fruit with a nut inside of the shea tree (Vitellaria paradoxa) are collected a women separate the nut from the fallen fruit, then boil and let the butter float to the surface. The butter is then milled and filtered for impurities, packaged in blocks

Shea butter is edible and may be used in food preparation and is included in the manufacture of chocolate.

Whilst Shea butter may sound a modern ingredient, it has been used for thousands of years. The ancient Egyptian of King Merenre, traded Shea butter 4300 years ago,

Cleopatra apparently loved shea butter. There is a mention of caravans of clay jars filled with shea butter for her use. It’s also said that this luxurious ingredient was beloved by the Queen of Sheba and Nefertiti

The shea tree was considered sacred and used to make the coffins for the early African kings.

Shea butter has anti-inflammatory properties which help the skin feel relieved from irritation it maintains the elasticity of the skin and reduces aging process.

Shea butter improves the production of collagen found in the skin hence maintain the skin’s elasticity. This will reduce the appearance of fine lines and wrinkles hence lowering the skin’s aging process.

Treats dermatitis, psoriasis, eczema conditions which tend to make the skin very dry, patchy, flaky and sometimes itchy. The inflammatory and moisturising properties will soothe the itchiness of the skin, lessen swelling and act as a humectant (barrier to retain moisture) hence prevent dryness.

Soothes babies’ skin and nappy rash. Shea butter with its amazing properties is great for baby skin and sensitive skin in general

For ladies and men who find their skin gets sore after shaving, applying Shea butter beforehand can eliminate razor burns.

It can treat acne and skin blemishes as the butter is absorbed deep into the skin providing the skin with cell repairing qualities to moisturise, heal wounds, cuts and abrasions.

Shea butter is used to reduce the appearance of stretch marks by restoring the elasticity of the skin and enhancing the production of collagen. More natural than a leading “Biological oil”. Frequent application of the butter to the affected areas will show great results.

Shea butter is a natural sunscreen because it contains cinnamic acid. Depending on the quality of the butter it will have a sun protecting factor (SPF) of 6 to 10. Since the SPF is low, it is recommended to use another sunscreen on top of shea butter for more protection against the sun rays.

The nutshell can repel mosquitoes.

A patented product “nutraceutical” is a shea product that has been developed for lowering people’s cholesterol levels.

The most obvious difference is Shea Nut Oil is a liquid oil and Shea Butter is a thick butter. However, the main difference is in their chemical composition, most notably their Stearic Acid content, which is the main fatty acids responsible for Shea butter’s thick texture. A process called fractionation separates the oil (oleic) and butter (stearic).

Shea oil is fractionated (separated) from Shea butter. The Oleic oil melts at a lower temperature and it is removed from the more solid shea butter. Hence it contains less Stearic fatty acid that gives shea butter its waxy consistency.  Shea Oil also loses some of the potency of the specific Vitamins, Amino Acids and essential Fatty Acids during processing reducing its potency.