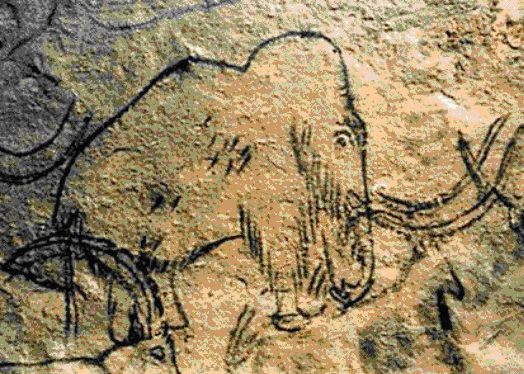 When anything prehistoric is mentioned, a very select group of creatures comes to mind. One of these is the iconic Mammoth.

Mammoth fossil deposits have been found in every continent except Australia and South America and in early Holocene deposits of North America.

The woolly, Northern, or Siberian mammoth (Mammuthus primigenius) is by far the best-known of all mammoths. The permanently frozen ground of Siberia has provided many preserved carcasses for study. Mammoths discovered preserved in the Siberian permafrost were believed to be burrowing animals that avoided sunlight and died when exposed to the sun. It was thought this explained why they showed so little decay. Remains of arctic plants have been found in the digestive tracts of frozen mammoth carcasses. French adventures heading for the North Pole in 1872 found so many well-preserved mammoth specimens that for a time they lived on mammoth, ‘broiled, roasted and baked’.

Fossil mammoth ivory was previously so abundant that it was exported from Siberia to China and Europe from medieval times to today. It is estimated that over 50% of the ivory sold into China is form mammoths. Scientists can determine a mammoth’s age from the rings of its tusk in a similar way to determining a tree’s age from its rings. The mammoth’s prominent tusks were directed downward and were very long, so long that in older males they sometimes curved over each other

One of the oldest-known musical instruments is a flute made from mammoth ivory.

From the Middle Ages up to the 18th Century, many Europeans believed that the bones of mammoths and mastodons belonged to giants drowned by Noah’s flood.

Scientific evidence suggests that small populations of woolly mammoths may have survived in North America up to 7,600 years ago. In 2015, a fossil tooth indicated that a tiny population of mammoths survived on Wrangel Island, an Arctic Island located off the coast of northern Russia, as late as 4,300 years ago.

Male woolly mammoths were thought to reach shoulder heights of up to 3.5m and to weigh up to six tonnes, the size of an African elephant.

The imperial mammoth weighed over 10 tonnes and the Songhua River Mammoth of northern China weighed up to 15 tonnes. The extinct dwarf mammoth species, Mammuthus creticus, was only around 1m tall, about the size of a modern African or Asian baby elephant – and weighed 300kg.

Ancient humans in Europe, realistically depicted herds of these animals on the cave walls where they sheltered. A notable set is the Rouffignac cave . It contains over 250 engravings, cave paintings and drawings, dating back to the Upper Paleolithic. Rouffignac Cave, also known as The Cave of the Hundred Mammoths.

Many mammoths had a woolly, yellowish brown undercoat about 2.5 cm (1 inch) thick beneath a coarser outer covering of dark brown hair up to 50 cm (20 inches) long. Some of the hairs on woolly mammoths could reach up to 3 feet (1 m) long, Under the extremely thick skin was a layer of insulating fat at times 8 cm (3 inches) thick.

The skull in Mammuthus was high and domelike. The ears, small for an elephant, were advantageous for an animal living in a cold climate because the smaller amount of exposed surface area reduced heat loss. A mound of fat was present as a hump on the back. Whilst the dome cannot be found in fossil remains its existence comes from cave paintings.

Mammoth teeth were made up of alternating plates of enamel and a teeth often became worn down by constant chewing motions.