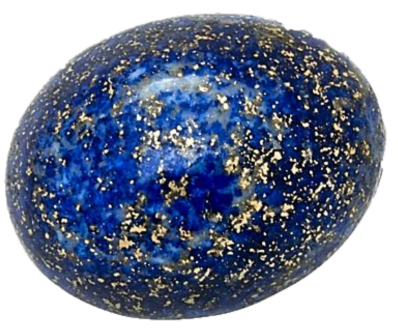 Lapis is the Latin word for “stone” and lazuli evolved from the Arabic lāzaward and Persian lājevard meaning “sky” or “heaven”. When combined it is the sky stone” or “heaven stone” which accurately reflects the appearance of some specimens with inclusions. Whilst it is more famously mined Afghanistan it was also mined in Lājevard, Persia, hence its Persian name. The mineral Lazurite is contained in all Lapis Lazuli. In several languages the colour blue is related to Lazulum including Spanish and Portuguese azul and azure.

Lapis lazuli has been mined in Afghanistan and exported along the ancient trade route between Afghanistan and the Indus Valley, on to the Mediterranean world and South Asia since the Neolithic age. Lapis artifacts, dated to 7570 BCE, have been found at Bhirrana, which is the oldest site of Indus Valley Civilisation. Lapis beads have been found at Neolithic burials in Mehrgarh, the Caucasus, and as far away as Mauritania.

The ancient Sumerian Royal Tombs of the (300 BCE) city of Ur in lower Iraq, contained 6,000 lapis items of lazuli: statuettes of birds, deer and rodents, dishes, beads and a dagger with a lapis handle, a bowl inlaid with lapis.

The Epic of Gilgamesh (17th–18th Century BCE) one of the oldest known works of literature mentions Lapis.
In Ancient Egypt, lapis lazuli was an extremely popular stone and was carved into amulets and ornaments. Lapis jewellery has been found by Archaeologists at Naqada (3300–3100 BCE). At Karnak, the wall carvings carvings of Thutmose III show lapis lazuli being delivered to him as tribute. Powdered lapis was used as eyeshadow by Cleopatra and the funeral mask of Tutankhamun.

In Egyptian Book of the Dead there is a gold eye inlaid with lapis lazuli. This was considered to have great power. On the last day of the month, an offering was made before this symbolic eye because they believed that on that day, their supreme being placed a similar image on his head.

Pliny the Elder wrote that lapis lazuli is “opaque and sprinkled with specks of gold.” The stone was ground down, mixed with milk, and applied as a dressing for boils and ulcers. The ancient Romans believed that lapis was a powerful aphrodisiac.

Lapis lazuli was often mistakenly called sapphire (sapphirus). The Greek scientist Theophrastus described ” sapphirus, which is speckled with gold” Indeed, references to sapphires in the Old Testament are for lapis lazuli.

Because the stone resembles the blue of the heavens and the golden glitter of the sun, it was seen as a symbol of success in the old Jewish tradition.

In Christianity lapis lazuli is the stone of the Virgin Mary.

In the European Middle Ages, powdered lapis lazuli and made into ultramarine, the expensive of blue pigments used by artists during the Renaissance period. In the Middle Ages, it was thought to be capable of keeping the limbs healthy and freeing the soul from error, envy, and fear.

Lazurite, the main mineral component of Lapis Lazuli is a high vibrational stone. It opens up our third eye to promote ascension, higher knowledge, and truth seeking.

These attributes combined with all of the other minerals contained within the stone (e.g. Pyrite, Calcite, and Sodalite) are all capable of bringing your individual traits to the fore e.g:

Pyrite inclusions assists in processing your thoughts and bringing them into reality.
Calcite helps awaken dormant mystical energies that lay inside of you.
Sodalite will enhance your mental insight to provide an understanding of how your thoughts are connected to your emotional body and how to control them.