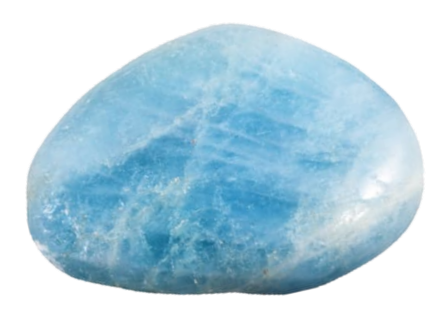 This beautiful pale blue-green stone is said by ancient lore to be the treasure of the mermaids! The name Aquamarine is derived from the Latin words: aqua (water) and marina (of the sea).

The Sumerians, Egyptians, Hebrews, and Greeks all admired aquamarine gemstones. Beads were discovered with Egyptian mummies. It was believed that the Hebrew High Priest of the Second Temple wore aquamarine stones engraved with the six tribes of Israel. Two thousand years ago, people in Greece engraved designs into aquamarine stones, turning them into intaglios.

Roman fishermen called the gemstone “water of the sea” and used it as protection whilst at sea and for luck in catching fish. Aquamarine was linked to the apostle St. Thomas, because it “imitated the sea and the air” and the Saint “made long journeys by sea, even to India, to preach salvation.” Identifying a certain jewel with one of the twelve apostles was common practice at that time

The Romans believed that if the figure of a frog were carved on an aquamarine, it served to reconcile enemies and make them friends. Another Roman legend stated that the stone absorbs the atmosphere of young love: “When blessed and worn, it joins in love, and does great things.” Aquamarine was also considered the most appropriate morning gift to give to a bride by her groom following the consummation of their marriage. Roman physicians also used it to treat overeating and bloating.

In Medieval times, the stone was thought to reawaken the love of married couples. It was also believed to render soldiers invincible.

William Langland’s “The Vision Concerning Piers and the Plowman,” from 1377, mentions the aquamarine as an antidote for poison. This antidote was widely known throughout Europe because poisonings amongst royalty was quite frequent. It was not necessary to pulverise the stone, as it was with other gemstones. Simply wearing the stone as a pendant or in a ring was just as effective.

Aquamarine is a blue variety of Beryl that crystallises in hexagonal columns. The blue colour of this stone comes from minor traces of iron. It can commonly be found in association with Muscovite. This crystal is a very rare stone that has a long history. The first recorded use of this mineral was around 400 B.C. in Greece but has been used throughout multiple societies for over 2,000 years. Aquamarine can be found in the United States, Brazil, Australia and several other countries throughout Africa. The highest quality specimens currently on the market are coming out of Pakistan and Afghanistan.

Aquamarine helps open a clear channel between your heart and throat chakras.

This connection allows you to speak from the heart and to help in solving of arguments and disagreements. Aquamarine can also support in cooling emotions and provide mental clarity.

Aquamarine underpins our wisdom, intellect, knowledge and clarity of the mind. If you have an open heart and clear mind opportunities and relationships will become easier to deal with.

Aquamarine is perfect for any teacher, manager, therapist or anyone else who speaks publicly. The stone can boost confidence when speaking to a large crowd and can help with stage fright.