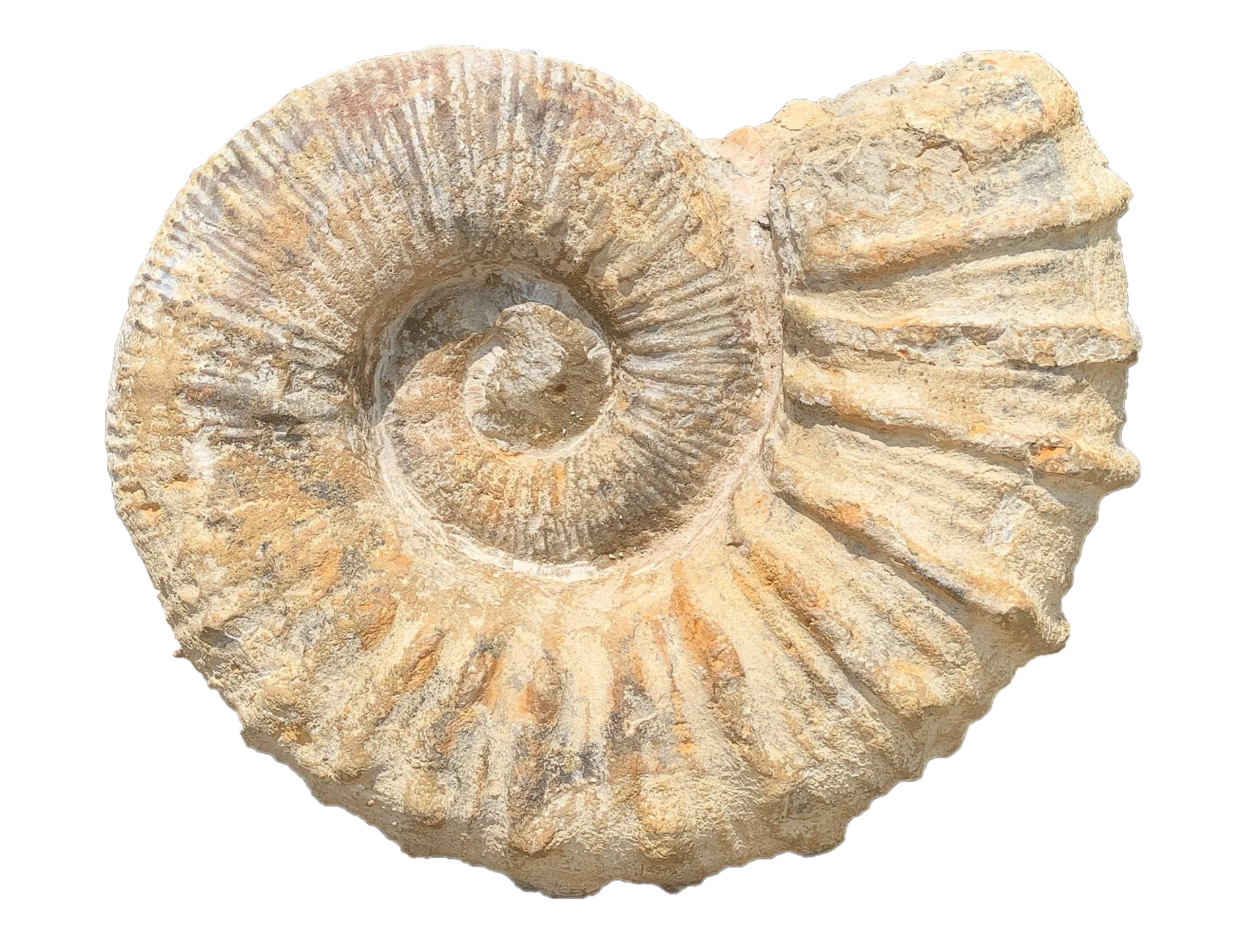 These creatures lived in the seas between 240 – 65 million years ago, when along with the dinosaurs they became extinct.

Ammonites take their name from the Egyptian god Amun, known to the Greeks as Zeus Ammon known for having curved horns like a ram.

Ammonites are cephalopods. The group Cephalopoda is divided into three subgroups: coleoids (including squids, octopuses and cuttlefishes), nautiloids (the nautiluses) and ammonites. Ammonites’ shells make the animals look most like nautiluses, but they are more closely related to coleoids.

Ammonites were not always curved they were small, straight shelled creature, known as Bacrites. They quickly evolved into a variety of shapes and sizes including some shaped like hairpins or paper clips. Ammonites quickly assumed a strong protective outer shell to shield their soft interior from damage and predators. Some genera of ammonites had shells that were coiled in more bizarre ways than the usual spiral. These are known as heteromorphs, from the Greek heteros meaning ‘different’ and morphe meaning ‘form or shape’.  One of the most unusual is the Nipponites mirabilis which is U shaped like a “slinky”.

The closest living lookalike to the ammonite is the Nautilus. Both have a similar structure with a solid shell comprised of many chambers in a spial. The body of the ammonite was contained within the large final, open-ended section called the living or head chamber. As they grew, they built new chambers onto it. They would move their entire body into a new chamber and seal off their old and too small living space with walls known as septa.

New chambers were added at a rate of one every four weeks, roughly 13 each year. Using this as a guide we can tell approximately how old an ammonite is by looking inside its shell. A shell containing 26 chambers could be assumed to have housed the creature for two years. Ammonites kept their original shell for all their life.

The chambered interior of the shell is referred to as the phragmocone. This contained gasses which enabled the ammonite to regulate its buoyancy allowing it to rise and fall in the sea much like a submarine.

Each complete 360° coil is called a whorl. Except for the innermost whorl, the shell is made up of three layers. The thin innermost and outermost layers are composed of prisms of aragonite (a form of calcium carbonate). The thicker middle layer is nacreous (mother-of-pearl), formed of tiny tabular crystals of aragonite

Some ammonite fossils bear intricate patterned details on their outer surface called Sutures. These patterns mark where the walls of the chambers, Septum, meet the outer wall of the ammonite shell. Suture patterns are extremely useful for distinguishing distinct species of ammonite. It is estimated that over 10,000 to 20,000 species of ammonite have been discovered.

Ammonites vary enormously in size the Nannocardioceras is small with complete adults rarely more than 20 mm in diameter. However, a part fossil of a Parapuzosia seppenradensis (Late Cretaceous) was discovered which has a diameter of 1.95 m in. If complete, it would have had a diameter of about 2.55 m. .Evidence suggests that they rapidly gained in size, especially females which grew 400% bigger than the males.

Whilst they look quite harmless, ammonites were predators feeding eating molluscs, fish and even other cephalopods. They stalked their prey, then once close enough rapidly extending their eight arms to grasp their prey. Ammonites have powerful jaws located at the base of the tentacles between the eyes these could crack other creature’s shells before eating the meat inside. Ammonites may have supplemented their diet with small plankton or vegetation growing on the sea floor. Ammonites were also prey, there is evidence of mosasaurs and ichthyosaurs having eaten them.

Early historians and naturalists compared the coiled shape of the ammonite to that of a snake and ammonites became widely known as snakestones. To cash in on the legend, many collectors and dealers in fossils frequently carved heads on ammonites. The coat-of-arms of Whitby in North Yorkshire, includes three ‘snakestones.’

Ammonites were thought to be a protection against serpents and a cure for baldness and infertility.