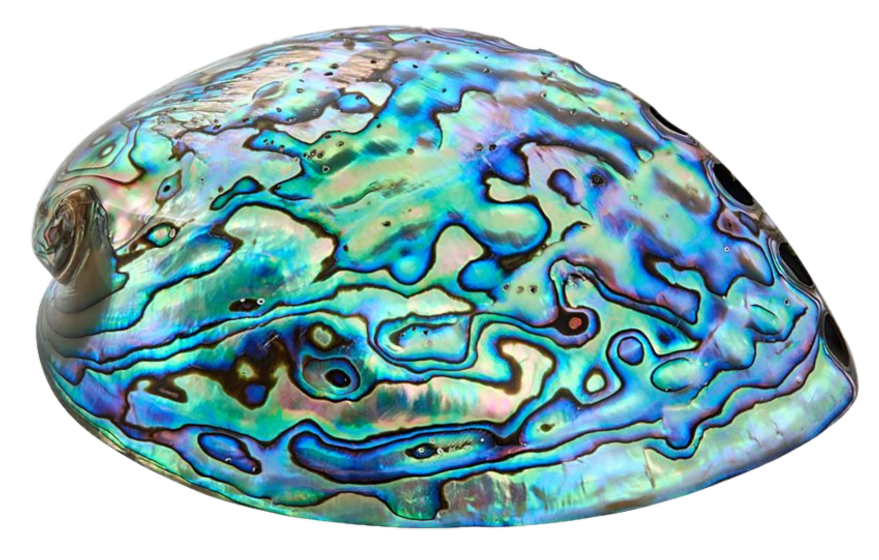 Abalone is the name for a shellfish (molluscs) from the Haliotidae family. The inside of their shell consists of iridescent, silvery white to green and red. The meat of abalone is used for food, and the shells of abalone are used as decorative items and as a source of mother of pearl for jewellery, buttons, buckles, and inlay.

Abalone shells have been found in archaeological sites around the world, ranging from 100,000-year-old deposits at Blombos Cave in South Africa abalones were harvested by Native Americans for at least 12,000 years, the size of red abalone shells found in middens declines significantly after about 4,000 years ago, probably due to human predation. Worldwide, abalone pearls have also been collected for centuries.

As you can imagine for shells that have been harvested for thousands of years, many stories exist around their history.

The Maori people of New Zealand call abalone Paua and use this shell in warrior artwork. They would use it as the eyes of the warriors and other demi-God figures.

The Maori’s believe the shell strengthens the body and the heart of the wearer. With a stronger heart and body, the person is thought to be able to communicate their feelings more clearly bringing connectivity and harmony to relationships. The way the colours of the shell shift in the light is also a symbol of change and transition in Māori culture to bring luck, peace, and prosperity to the person wearing it.

The Apache nation believes there is a connection between the shell and the first woman known as White Painted Woman. She is also known as Esdzanadehe or Changing Woman. She survives a flood in the shell of an abalone. As the floodwaters recede, she walks the land. She is impregnated by the sun and has a son. This son becomes the Killer of Enemies, protecting her from evil.

She is later impregnated by the rain and births the Son of Water. At the end of the White Painted woman’s life, she walks east until she finds her young self. The two merge and in this way, she is born repeatedly, through endless generations.

The coming of age ceremony for Apache girls, the Sunrise Ceremony involves the shell of the abalone. It is a symbol of new womanhood fusing with previous generations of the White Painted Woman. They wear the abalone shell on their forehead during the ritual to connect to their spiritual heritage. The abalone power teaches the girls their spiritual power as women and their ability to heal as they ‘become a woman’.

The abalone mollusc is highly fertile. As such, many people trying to conceive or wanting to guarantee the health of a new child or grandchild wear the abalone stone. For new mother’s mother-of-pearl can provide much needed emotional, physical, and mental support to new moms. It can remind a new mother of the extraordinary act she carried out in creating and nurturing of an individual spirit. The fertility aspects can bring wealth, abundance, or new opportunities at work. The shell has been used as currency in many native cultures.

If you believe in the psychic powers of ancient organic gemstones, the abalone stone has much to offer.

It can stimulate psychic development such as intuition. It can improve your ability to express your emotions with clarity. this can encourage cooperation with those around you at work and in your personal life.

Many cultures think of the abalone as a symbol of water with its associated calmness and tranquillity. The abalone had been immersed in the relaxing sound of the ocean waves for its entire life. It is thought that these waves of relaxation transfer to the wearer of the abalone shell and can calm the mind and relax the spirit.

The shell of abalone is a kind of shield and has protective and healing qualities. Protecting the heart in both the physical and metaphysical aspects. It is believed to boost the immune system with anti-inflammatory properties to assist with joint disorders assist digestion and bring emotional balance.

The abalone mollusc is very fertile, ideal for people wanting to conceive or wanting to guarantee the health of a new child or grandchild. For new mothers, it can give much needed emotional, physical, and mental support. Reminding a new mother of the extraordinary act she performed out in creating and nurturing a new life.

The fertility aspects can bring wealth (abalone was a form of currency in many cultures), abundance, or new opportunities at work. The shell has.

Abalone can help us communicate our emotions clearly and as a symbol of empowerment and feminine power and to tolerate the imperfectness in each of us.

It is believed that because the shell protects the soft core of the mollusc. It can protect the more sensitive aspects in us and project an image of strength.